Sorry for missing my Monday post this week. I had a busy weekend. And you can make of that what you will, you single-track-minded types.

As compensation, to keep you busy while I’m typing something up for tomorrow, I present you with… kittens! The internet has proven that there is nothing quite as distracting as a captioned photograph of cats, except maybe a video of cats. So here you go. 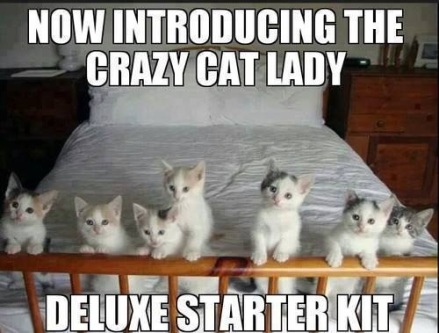 HT to That Guy

But for the future, just to know… the How To of the Day last week on my Google homepage was “How to Know if You’re a Crazy Cat Lady.” Yes, I read it. Wouldn’t you?

I give up. That’s it. There’s nobody for me to marry so I’m not getting married.

There’s a lot more you can do when you’re single. I could start that spinster colony. Or become a crazy crusader. You know, one of those women who fly about making the world a better place. And everyone watches them zoom around and says, “She does such wonderful work but…” they twirl their fingers around their ears. Then they lower their voices and add “And it’s only because she never got married. If she had, she would have just settled down like everyone else.”

And they’ll decide to marry me off but I will refuse to go out because why do that to yourself? It’s just a stupid cycle of hope and misery. And then they’ll wander off muttering that I’m too picky and that’s why, yes that explains everything, they should have known, because what normal person would still be single at my age?

There are lots of things in the world that need improving. I’d never be short of a crusade. For example, I’ve always wanted to go back to my high school and teach Jewish history so that it’s actually interesting, instead of as a long list of names, dates, and books written. If I have a latent hatred for book-writing rabbis, it’s because of that class. Also dying rabbis, because then there’s another date to memorize. That would be my first crusade.

I could expand it by creating a Jewish History Society with a recreationist museum full of actors pretending to be burned to death in shuls and stuff like that. We’d have swashbuckling Jewish pirates, Jewish merchants, turban-tying Jewish viziers, stylish Jewish bankers, and horseback riding, pistol-toting Jewish explorers. All the people you never hear about because they were Rebs and not Rabbis (although some of them did write books).

Then there’s my bais Yaakov improvement project. I’ve noticed that a lot of bais Yaakov grads, who in all appearances are very aidel knaidels, believe that their high schools failed them in a single, very significant way. Not off-the-derech nobody-loved-me types of people and complaints. More if-I-wasn’t-so-well-grounded-this-would-really-disgust-me types.  I want to go around collecting interviews, searching for a possible common denominator, and then presenting the study to principals in the hope of improving our educational system. That could keep me busy for a while.

Yes, there are a lot of great and important things to do in the world. And as a single spinster, a crazy crusader, I will have the time and resources to do them. There is a bright, husband-free future ahead of me. So why get upset? If it ain’t working, just give it up. Not everyone can succeed at everything. Move on to something that you can do instead.

Note: This is not the post I promised commenter Noah. That one is still in second draft and will probably need four more to be presentable. This is filler material off my hard drive.

However, please rate this post on a five-star scale, with five meaning “I emailed this to my friends” and one being “gosh you were desperate for filler.”

I was searching for a specific post yesterday, but alas, it had no keywords. It was about why perfectly normal and apparently desirable people are still single, and how they’re a comfort to the rest of us that at least it isn’t (necessarily) our freakishness that keeps us single.

I never found it, but I did find a few other posts you might want to (re)visit. Here’s the first:

From two years ago about why to get married – it keeps you from slowly losing it. With no second party to moderate your behavior, it’s a slippery slope into self-approved nuttiness.

On the bright side, my prophesy never came true – I have yet to walk up to a strange man and straighten his tie.